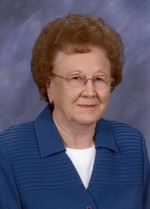 Lucille Montgomery Payne passed away November 26, 2019. She was born in Cross Plains on April 26, 1923 to Loyd and Cassie Montgomery. She married her high school sweetheart, Glenn Wiley Payne, on May 16, 1942 and they made their home west of Cross Plains as they began a life of farming and ranching. They were baptized together on July 1, 1945 in the First Baptist Church, where Lucille later served as secretary for 43 years.

During World War II, Lucille followed Glenn to California and resided in San Luis Obispo while he served in the Pacific with the Headquarters Co. 5223 Combat Engineers on Okinawa. After the war, the couple returned to Cross Plains and formed the Payne Rafter G Ranch.
Lucille was a member of First Baptist Church of Cross Plains for over 50 years. She was also a member of the Cross Plains Garden Club and distributed thousands of bluebonnet seeds west of town for future generations to enjoy.

She was proceeded in death by her husband, Glenn, and parents Loyd and Cassie Montgomery. Survivors include son, Bobby and wife Cindy, granddaughter Jodi Lynn and husband Levi Goode, grandson Ryan Glenn, and sister Jo Ann Ringhoffer, all of Cross Plains.
In lieu of flowers, the family requests that donations are sent to First Baptist Church of Cross Plains, the Cross Plains Senior Center, or the local charity of your choice.

All rights reserved. This obituary is also archived at obittree.com